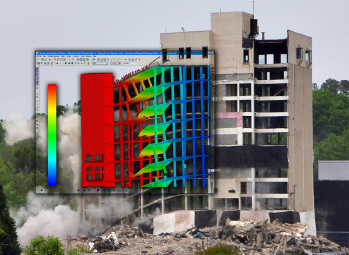 Applied Science International, LLC is dedicated to “Changing the Known Built World” by bringing an advanced level of scientific inquiry to the examination, analysis, and study of structures for a safer world. During the past decade ASI has been arduously working to bring a new, more advanced method of structural analysis to the forefront. Called the Applied Element Method (AEM) , the approach is superior to its predecessor, the Finite Element Method (FEM). By allowing for the automatic initiation of cracks and the separation of elements, AEM provides a crucial, unparalleled capability for analyzing the safety and security of structures subjected to a catastrophic load.

Born out of this effort, one that would allow engineers to more clearly analyze the stability of structural designs, ASI proudly introduces Extreme Loading® Technology (ELT). Positively affecting the design and analysis of structures, ELT is the culmination of the combined efforts of leading scientists and engineers in the implementation of AEM. It is our firm belief and commitment that ELT has the potential to reinvent all modeling applications…Changing the Known Built World.