ASI Europe, a member of the INACHUS Consortium, took part in the dedicated conference organized in Valabre, France, on the 16th of October 2018. ASI has been involved within INACHUS Project to provide a simulation tool for the single building assessment, with the aim to help USaR professionals to improve their situational awareness after the collapse of buildings. The collapse analysis performed with the software Extreme Loading® for Structures achieves to provide a 3D model of the target building, in order to assess damages, the stability of the structure, rescue paths, and potentially voids were victims could be trapped. 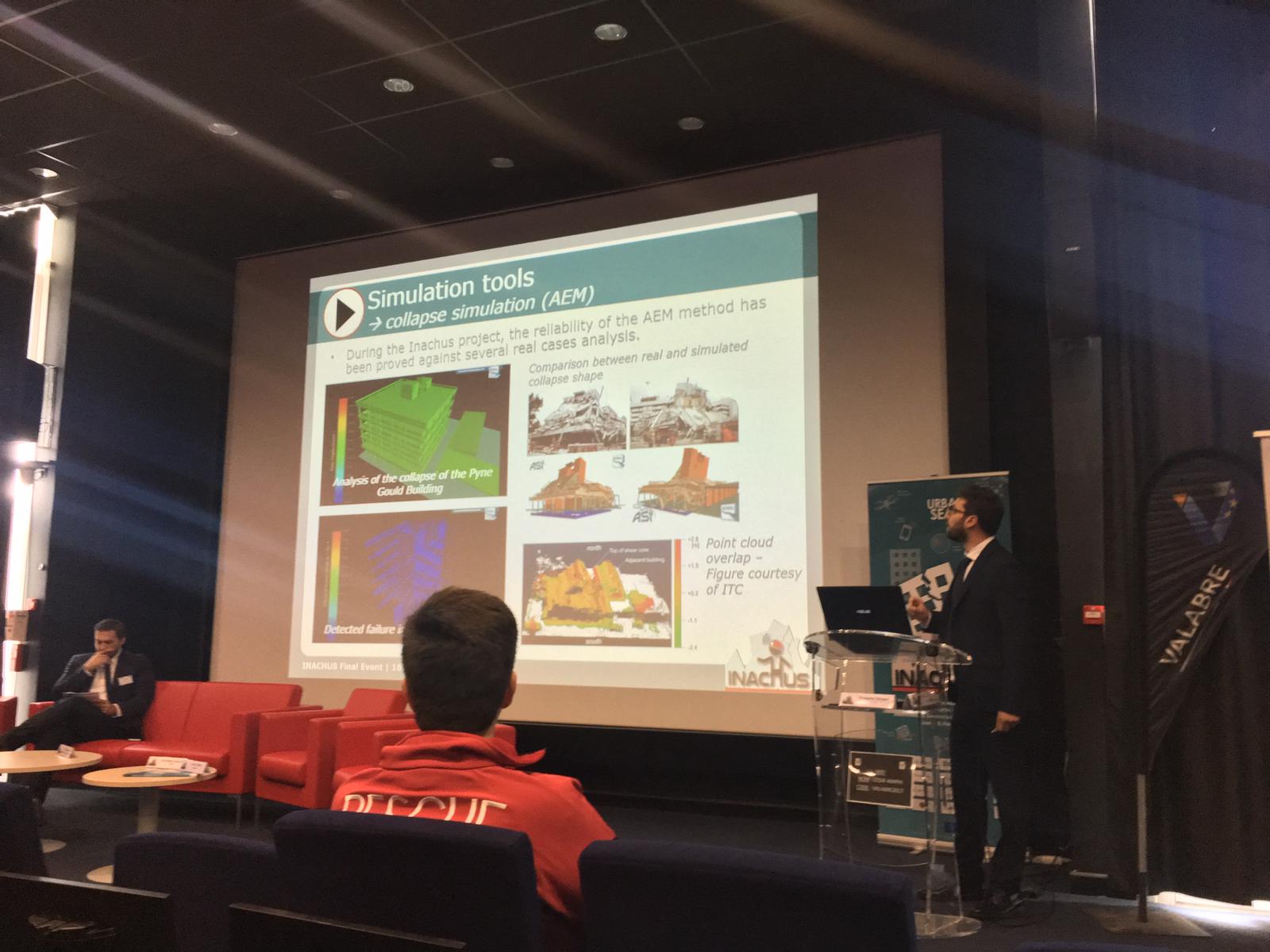 During the conference, the results of the work performed by ASI Europe were shown to the key representants from USAR teams in Europe (Germany, Netherlands, Italy, France, Greece). Examples are the forensic analysis of the collapse of the Pyne Gould Building in New Zeland or the collapse simulation of the INACHUS Pilot 2 Building in Lyon, France. Keynote of the presentation was the capability of the AEM method to cover the entire domain of the building collapse, form the plastic stage, to the creation of the first cracks, to the collision with adjacent buildings; the reliability of the method was proven showing side by side comparisons between analysis and actual video recorded during the collapse. Furthermore, several overlaps between resulted 3D models and actual point clouds of the collapsed buildings were shown. Different application fields for the collapse simulation were presented, starting from the vulnerability assessment of public and strategic infrastructures, with the presentation of the analysis of the collapse of the Morandi Bridge in Genoa, Italy, to conclude with the city quarter assessment of a quarter in the city of Roquebillière, France. Applied to an entire city quarter, the analysis aims to provide information not only on the single building damage but also on buildings interactions, road interruptions, and faster rescue paths between the debris heaps.

The INACHUS partnership composed of organizations from 9 EU member states and 2 associated countries, to form a balanced consortium aiming to achieve a significant time reduction related to Urban Search and Rescue (USaR) phase by providing wide-area situation awareness solutions for improved detection and localisation of the trapped victims assisted by simulation tools for predicting structural failures and a holistic decision support mechanism incorporating operational procedures and resources of relevant actors.

The conference was co-located with the INSARAG Africa Europe Middle East regional meeting, which started the next day and where INACHUS project had a stand. The Press Release of the event is available here: INACHUS_Press Release 7 FE _ng