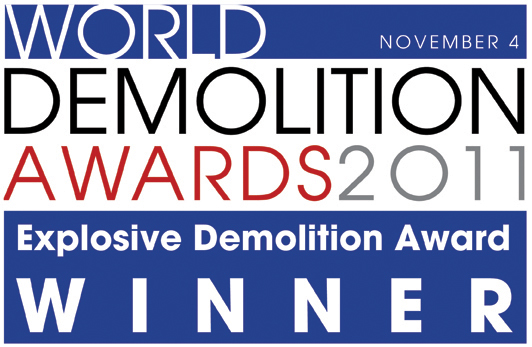 Congratulations to Fábio Pinto Bruno and his team at Fábio Bruno Construções, who has just taken home the Explosive Demolition Award from the 2011 World Demolition Summit held in Amsterdam this past weekend.  The Explosive Demolition Award is one of twelve categories presented at the Gala dinner during the Demolition Summit.  Fábio Bruno Construções won the award for two of its latest implosions University Hospital in Rio de Janeiro, Brazil and Castelão Football Stadium in Fortaleza, Brazil.

Applied Science International (ASI) is proud to have worked with Fábio Bruno Construções in the design and analysis of demolition plans for both projects using its proprietary Extreme Loading® for Structures software (ELS).  In both projects ASI modeled the “as built” and “as damaged” condition of the structures in 3D including masonry walls, columns, beams, slabs, reinforcement details, pre/post tensioned cables, elevator shafts, expansion joints, and temporary shoring in its ELS software for analysis of the demolition plan. The models also included material decomposition of both the concrete and steel reinforcement in corroded areas of the structure so they best reflected real-world conditions.

Once the model was created, the team was able to analyze several demolition scenarios, studying the entire demolition sequence from initial failure, through to separation and collapse.  This allowed the team to optimize the placement of explosives, weakening and estimation of debris fields. Throughout the process ASI and Fábio were able to see the results of each proposed scenario to determine the proper sequence and locations of charges for a safe demolition.

The Castelão Football Stadium project involved the removal of several sections of the cantilevered stadium by controlled collapse, with the remaining structure to be renovated in preparation for the upcoming 2014 World Cup.  This was a implosion was a challenge because of the sensitivity of both the remaining sections of the stadium and the 3-story structure located less than 13m behind the cantilevered stadium.  With ASI, Fábio Bruno Construções worked to create a demolition plan that would both efficiently collapse the stadium sections while keeping the remaining stadium sections and surrounding structures undamaged.  An initial concept was developed to utilize the cantilevered action of the upper seating area as a pivot point allowing the area to rotate down around it, increasing the gap between the 3 story building and the stadium.   A variety of demolition scenarios were analyzed in ELS to determine the size of the compression zone that needed to be blasted for it to create a plastic hinge allowing for this rotation.

For both projects, due to the location of adjacent buildings and sensitive equipment, ASI simulated the effects of debris in causing temporary ground acceleration in the soil. This was important as high velocity impact from building debris on varying soil composition can be hazardous to surrounding infrastructure both above and below ground. Through this analysis all ground acceleration levels from impacting debris were determined to be within acceptable limits.