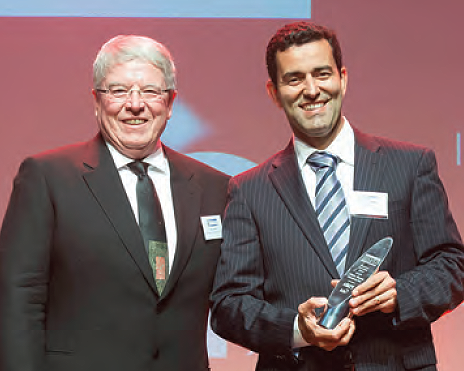 The 2013 Explosive Demolition Award was collected by Fabio Bruno Pinto and was presented by Dan Costello.  Fabio gained the Award for safely performing the risky implosion of three reinforced concrete buildings with 7, 6, and 5 floors in the city of Niterói in Brazil.  The buildings belonged to the former Santa Monica Hospital, which had been vacant for more than ten years.  There were many elements of risk that had to be studied and eliminated during the implosion.

Applied Science International assisted in designing the implosion sequence. The primary goal of the design was to ensure that debris from the implosion fell toward the center of the buildings footprint, rather than along its edges. To achieve this, several scenarios were studied to decide which columns were to be loaded with explosives and which should be left uncharged, as well as the exact delay and sequence of the column removal.  For more details about the Niterói hospital and other demolitions ASI has assisted with, visit ASI’s Case Studies page.